Jim King & Jan Brewington, pictured above with the sliding door that Jan restored, after it had been locked shut during the home’s stint as a boarding house! Jan’s children, Alex and Stuart, were excited to take on the task of renovating their old home!

This year, Jan Brewington’s home turned 100. And for nearly one quarter of its history (23 years), she’s been its devoted steward. Within its walls, she raised two children, and now, it also serves as her office; Jan and her husband, Jim, own Dram Tree Realty.

In her work, Jan specializes in real estate downtown, often vintage spaces. She sees the value in them, advising homebuyers that, while it can be difficult to find an affordable home in Wilmington, if you’re willing to move into an old home and live in it while making repairs, you can make it work—and live among a beautiful history.

Jan and Jim are proud of this history, and like many old-home homeowners, they feel connected to those who came before. “Charlie Whitty, the Airlie butler, lived here. He owned The Barn, a nightclub where Louis Armstrong, Cab Callaway, and Ella Fitzgerald performed.” When performers came in to town, they stayed with Mr. Whitty—Ella Fitzgerald may have sung under that very roof!

Later in its life, 706 S. 7th St. had been a boarding house. When Jan bought it, she took on the task of turning it back into a home. “Every room was a bedroom,” Jan says, remembering all she had to do to open it back up, to provide space for her family. The pocket doors had been locked shut, and Jan pried them back open. Over the gorgeous wood floors, there were three layers of carpet, which she tackled with the help of her children. 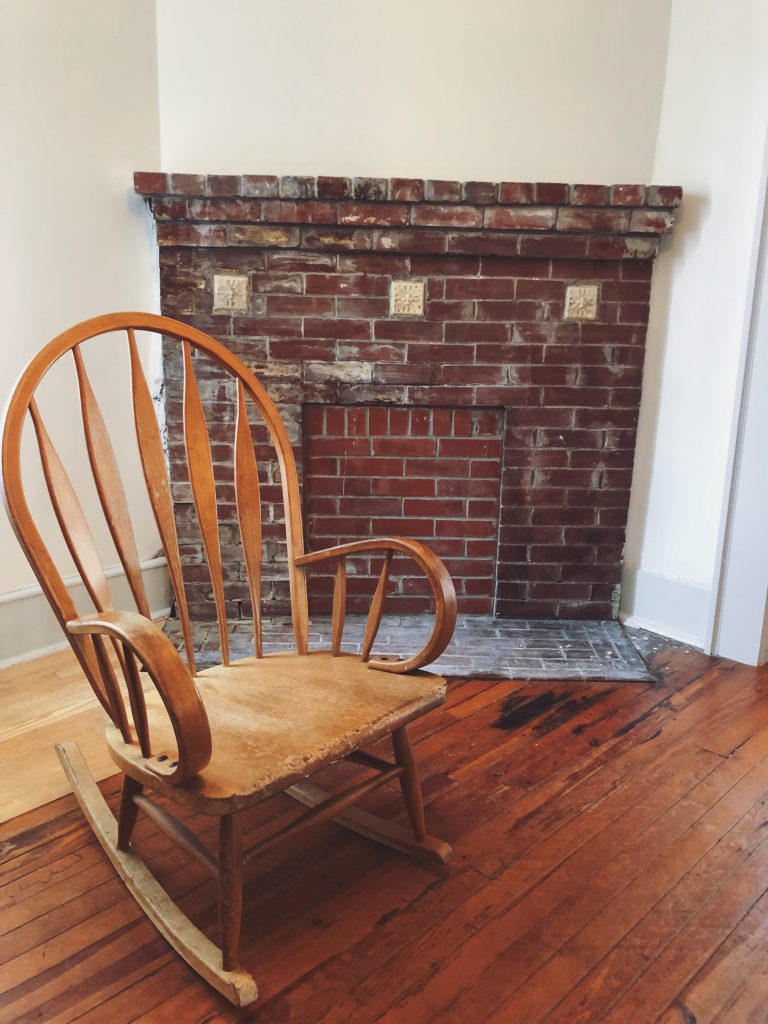 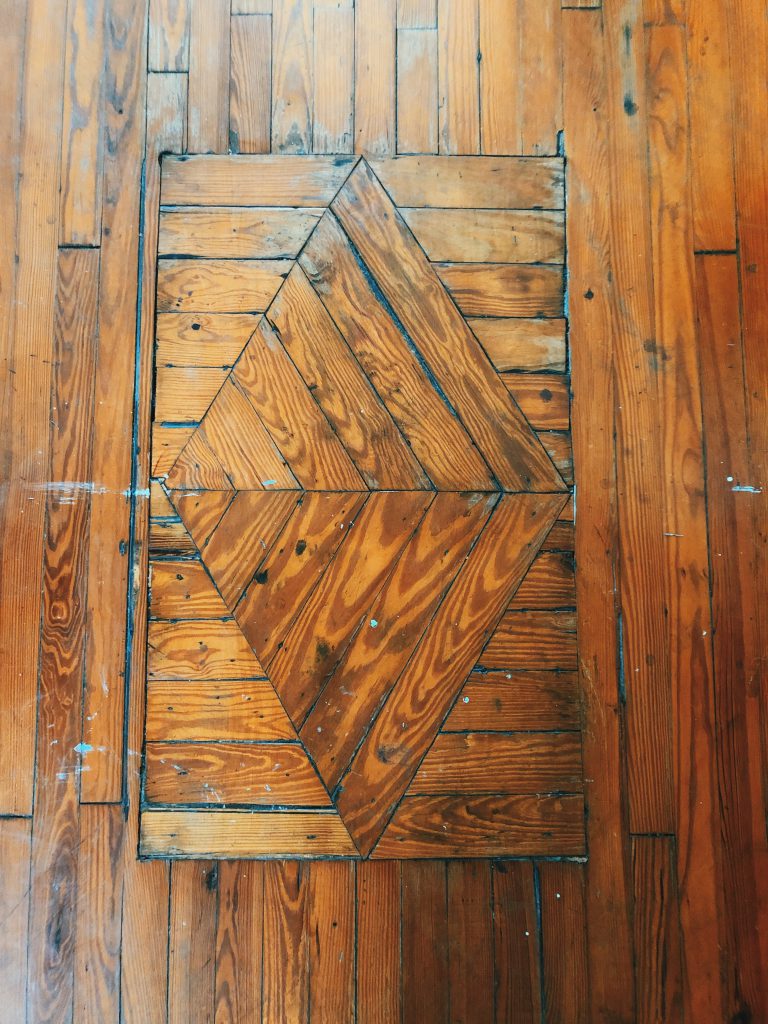 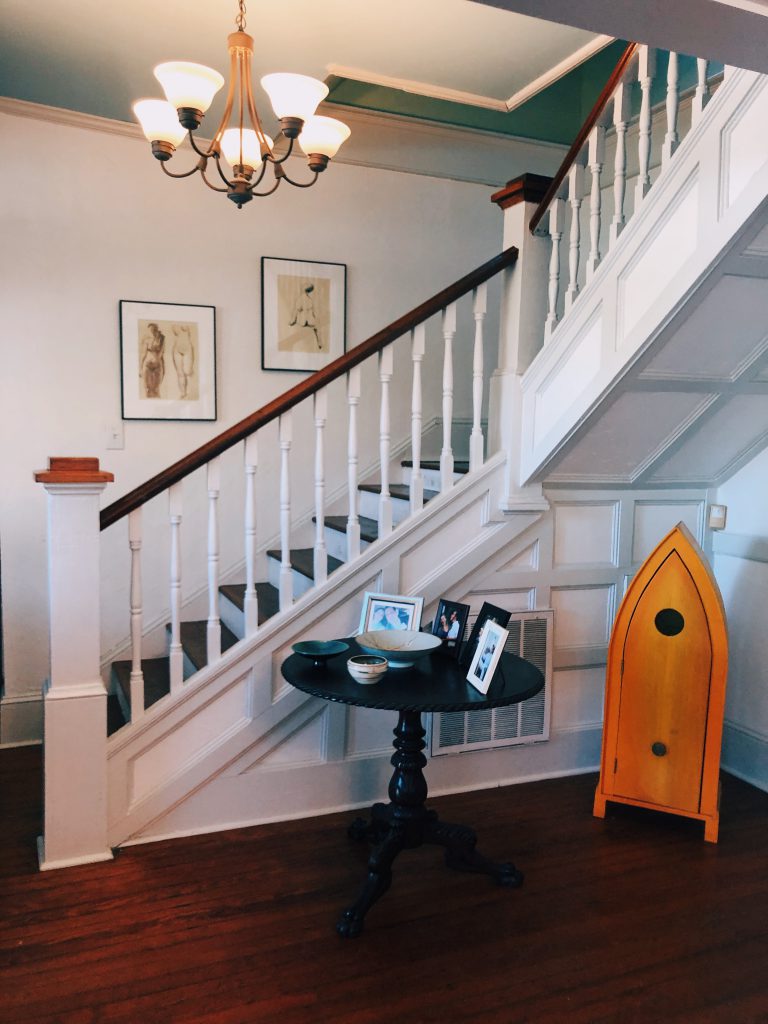 But of course, life is always a cycle: two steps forward, one step back. After decades of putting her heart and soul into fixing up her beloved old home, Florence hit Wilmington hard. Jan and Jim spent months fixing walls, windows, and flooring—an especially daunting task, since 706 S. 7th St. doubles as their home and their office. During the storm, as rain was pouring in, Jan and Jim recall dashing back and forth, doing their best to save their files from the deluge.

“We had to paint the entire downstairs,” Jan says. Long ago, when she’d first moved in, Jan removed the panelled walls, revealing damaged sheetrock she couldn’t afford to replace. Even with this setback, it seems that Jan has a knack for turning tragedy into opportunity: she and a friend went at it, tackling the entire project in a single night, applying an impressive stucco-esque finish that looks spot on. “It used to be a dark ochre,” she says, and Jim cringes. They went for a different look this time around. It was a massive undertaking, but they did it all themselves—and even managed to finish by Christmas! Now, their textured walls are light and airy—ever so slightly off-white, a blank slate. At this point, Jan and Jim have mostly recovered from the storm damage, but as it goes with old houses, there’s always a project on the horizon. In this case, the next update at 706 S. 7th St. will be a fresh coat of exterior paint, which they’re still working towards. By the time that project is done, they imagine their house will have turned 101, and they’re doing their research to prepare for the finishing touch: a black plaque from Historic Wilmington Foundation!

The storm threw Jan and Jim for a loop, but they bright-side folk: some things are better on the other side. Beyond the change in color scheme, the Florence Fix-It grant helped Jan and Jim in more ways than just repair costs. It connected them with HWF: “Honestly, the best thing that happened with all of this is that we became members of this amazing organization. We’ve volunteered for the Azalea Festival Home Tour, the Castle Street Crawl. This is the most fun of any organizations we support, and we love being members.”