Emily and Dan Happick’s first happy memory of their historic neighborhood was taking engagement photos in Wallace Park. Little did they know, two years later they would buy the home of their dreams just six blocks away: a pristine bungalow with crowd-pleasing trim, on a tree-lined street within a short bike-ride of downtown. 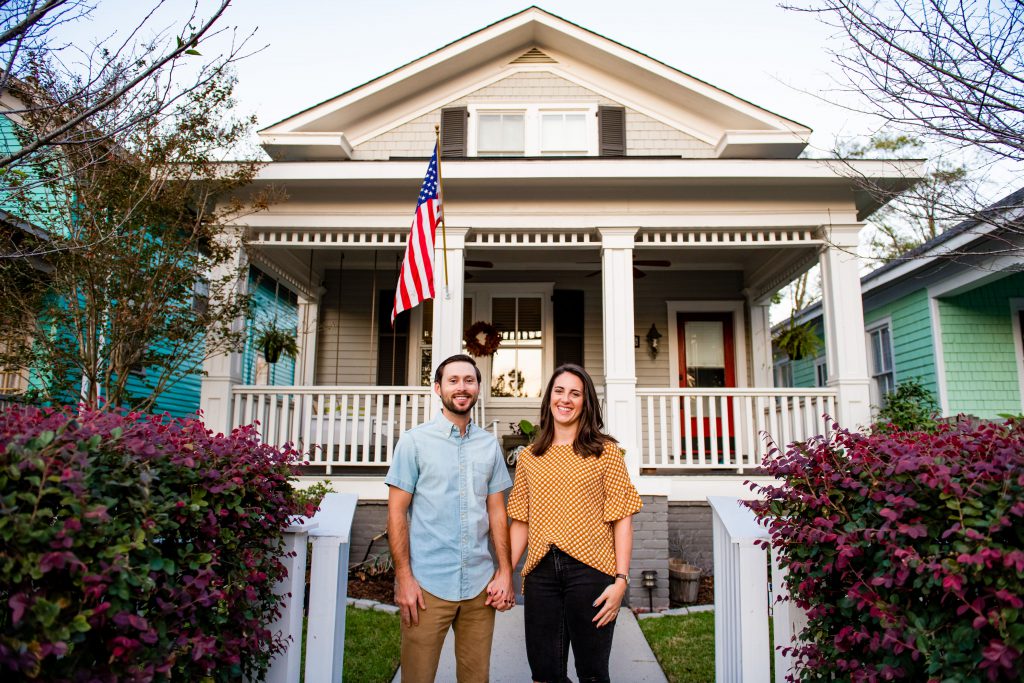 Their home on Wrightsville Avenue is one of the earlier homes in Wilmington’s first streetcar neighborhood. Families who have lived in Carolina Place for generations now welcome new neighbors—young growing families and transplanted retirees. Many breathe new life into their old homes as they paint their cottages in classic or happy hues and reclaim the historic character of their bungalows, four-squares and Queen Anne cottages.

Like so many other century-old houses, Emily and Dan’s bungalow needed some love, but luckily, its last steward had come to the rescue. “We were lucky to find it after the previous owner did the hard work of restoring it,” says Dan. 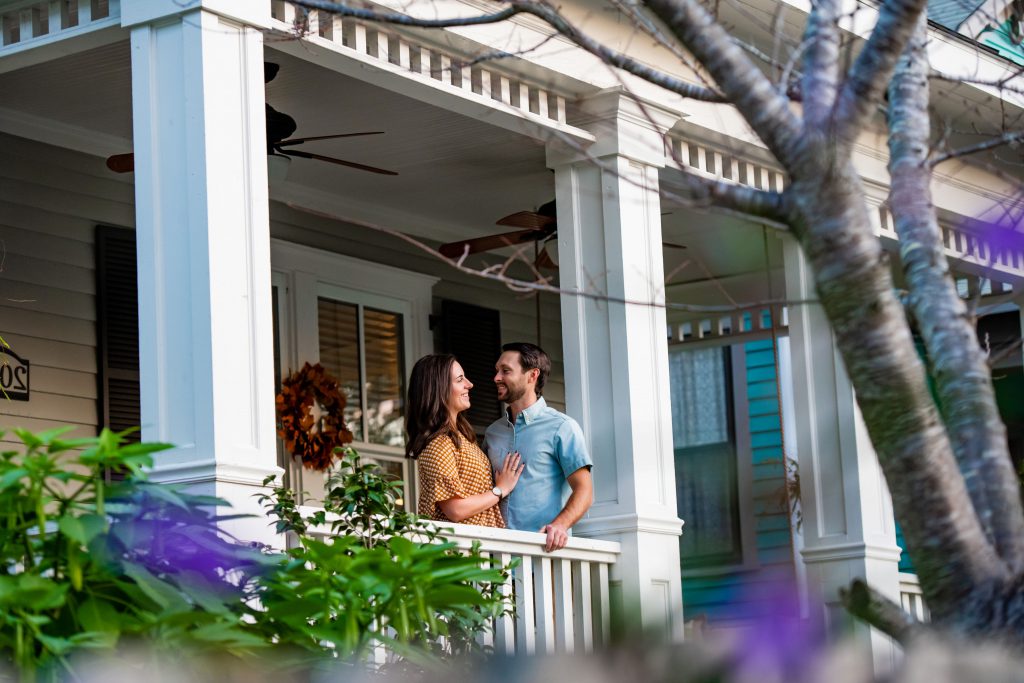 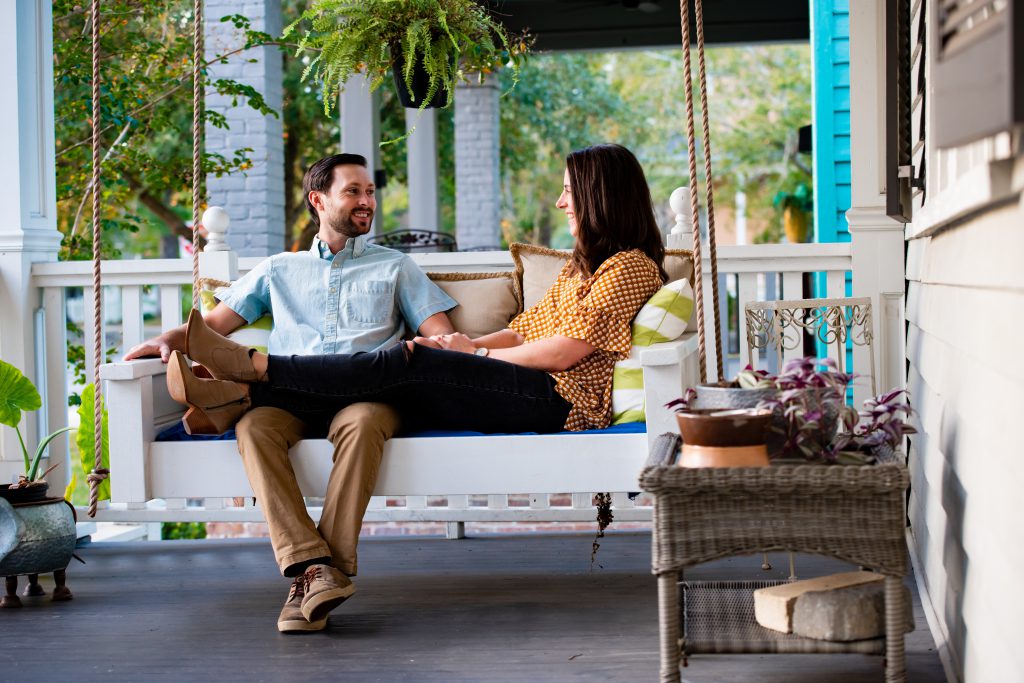 An original double-sided fireplace separates the family room from the dining room and fresh white bead-board on the first floor wraps its way up the staircase. Known as the Richard L. Meares house, circa 1912, Emily and Dan’s home still has original five-panel doors with their knobs and matching locks, as well as the gorgeous iron-cast clawfoot tub upstairs.

“I love the attention to detail,” Emily says, pointing to the molding, “and how the large, original rope-and-pulley windows bring in the natural light.” With high ceilings and a free-flowing interior, the house feels bright and airy. In the morning, the sun brightens their east-facing bedroom, and at dusk, their front porch is a prime spot for viewing the sunset—not to mention the fireworks on the 4th of July. 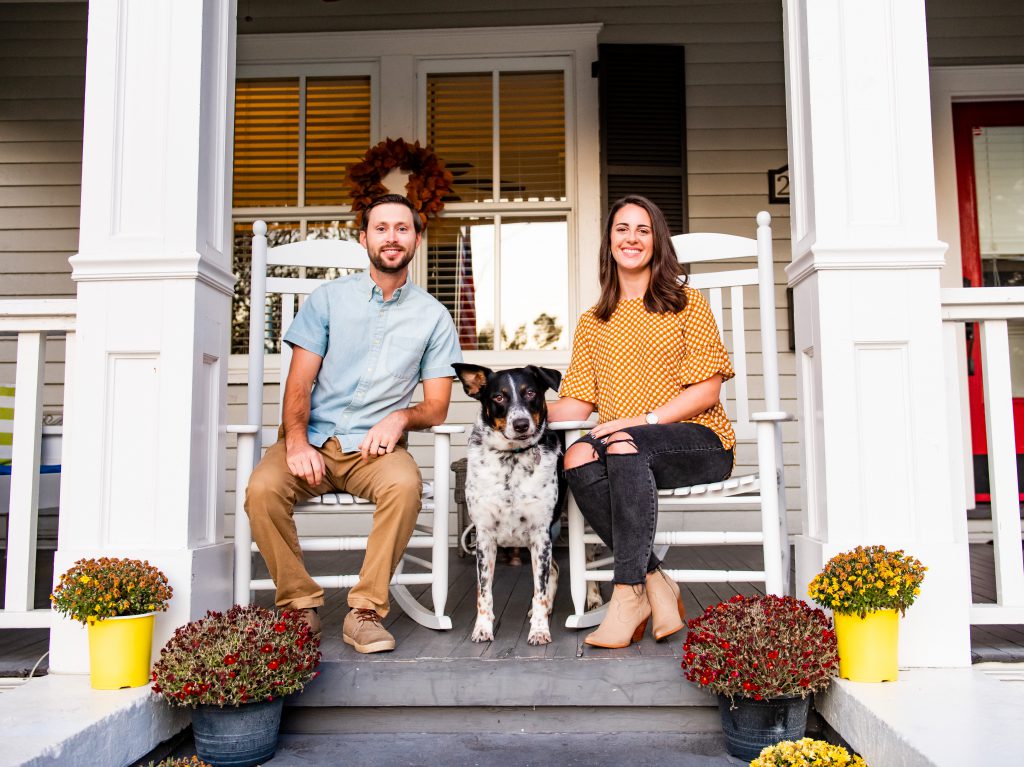 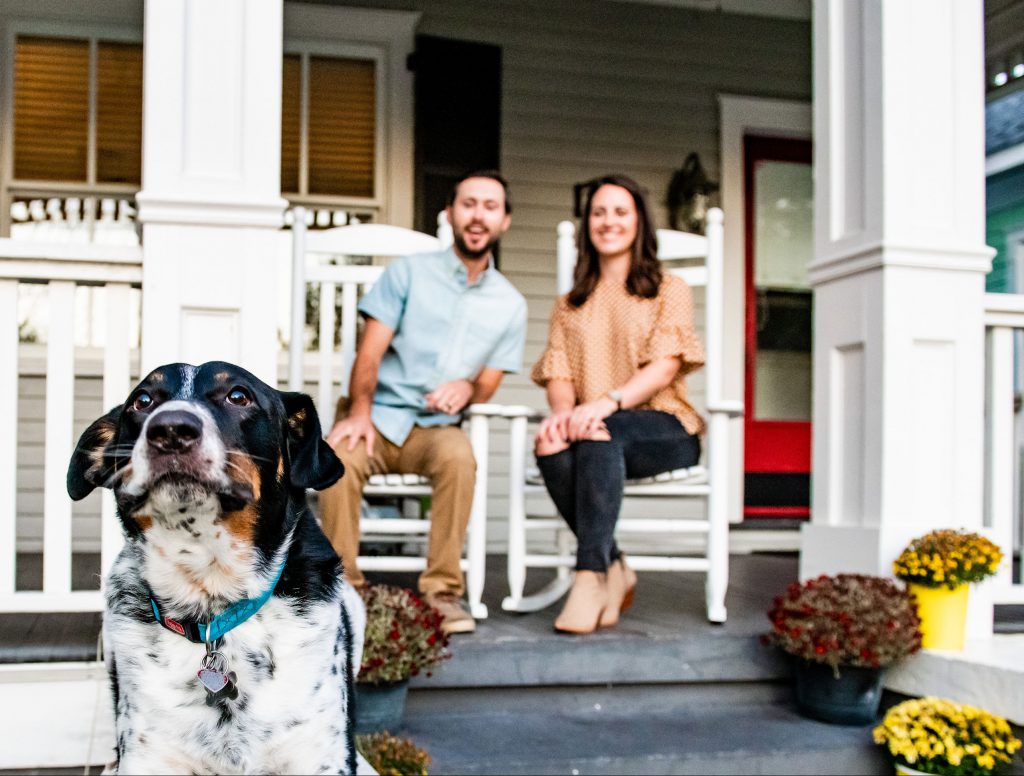 In fact, it was the wide front porch that drew Emily to the house, and now, their family and friends can’t get enough of it. The close proximity of the houses—and those inviting front porches—bring diverse neighbors together in this tight-knit neighborhood. “The Christmas crawl, the 4th of July Party in the Park, all of that stuff is so much fun here,” says Emily. They love sitting on their porch on Halloween and handing out candy to hundreds of kids, guessing what their costumes are supposed to be. “But this year was the first Halloween we weren’t here. We didn’t want the house to be empty, so we invited friends over to hand out candy for us.” The Happicks found a way to make memories on the porch even when they were not there to make them. They’re now preparing for their fourth annual Friendsgiving; Dan brags a little: “Our front porch is always packed. This will be our fourth year. Everyone brings food, and we have a 25 pound-turkey.” 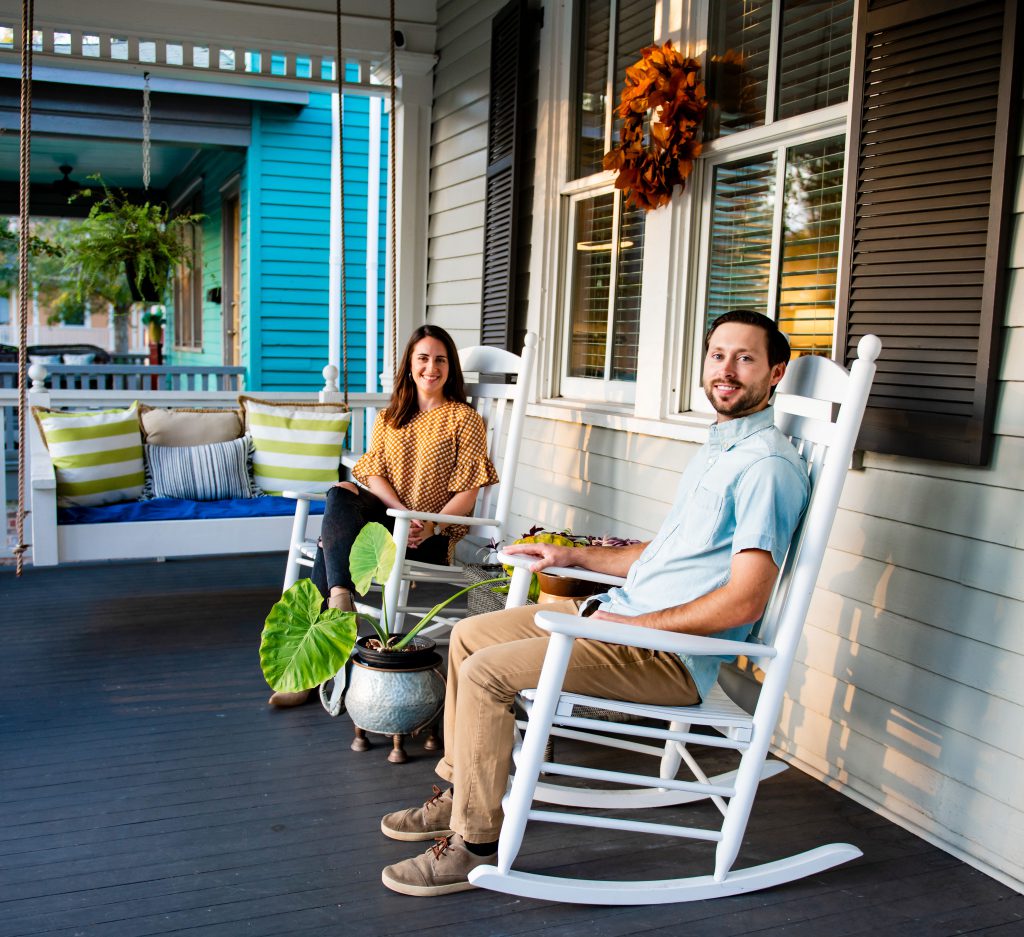 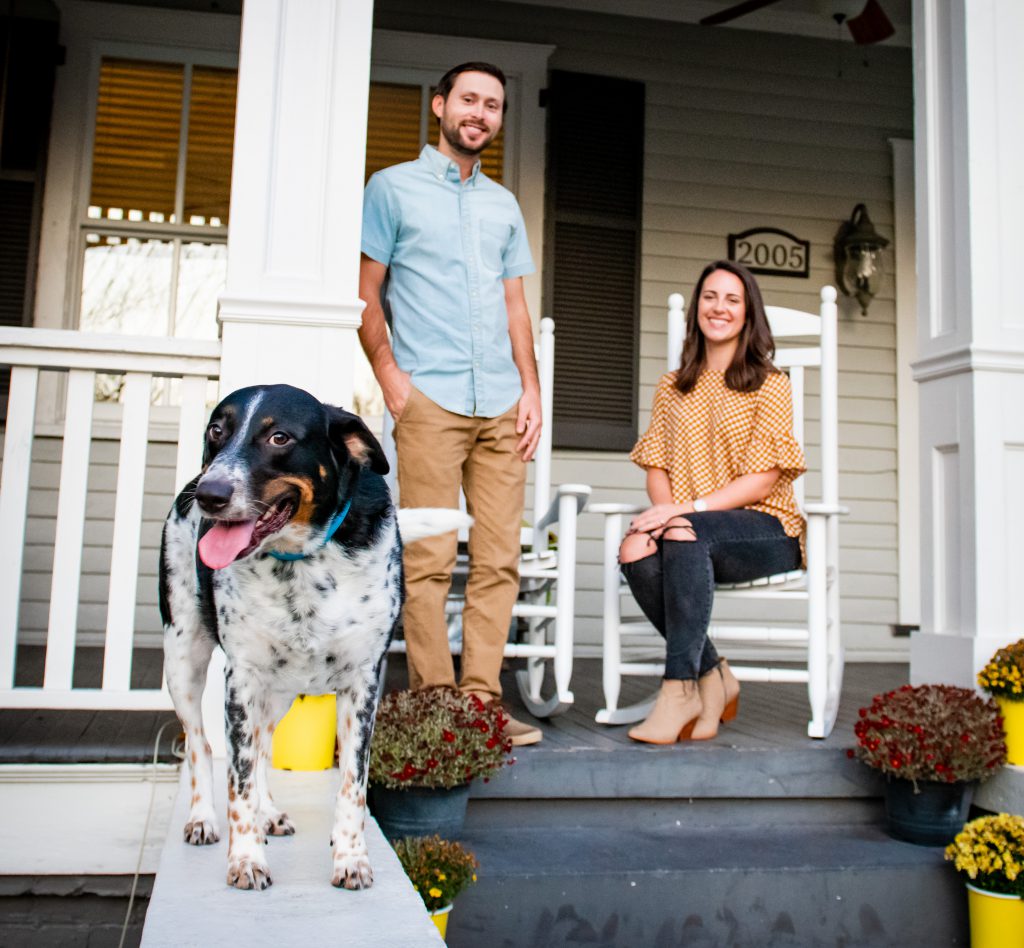 Hollywood is also attracted to their neighborhood: A few months ago, “Halloween Kills” featuring Jamie Lee Curtis was filmed around the corner from the Happicks. Two nearby bungalows were also used in the “One Tree Hill” series, and Netflix filmed a scene in another neighbor’s backyard last year. There’s no doubt that American pop culture has woven its own history into this already historic Carolina Place neighborhood—proof that history isn’t static. 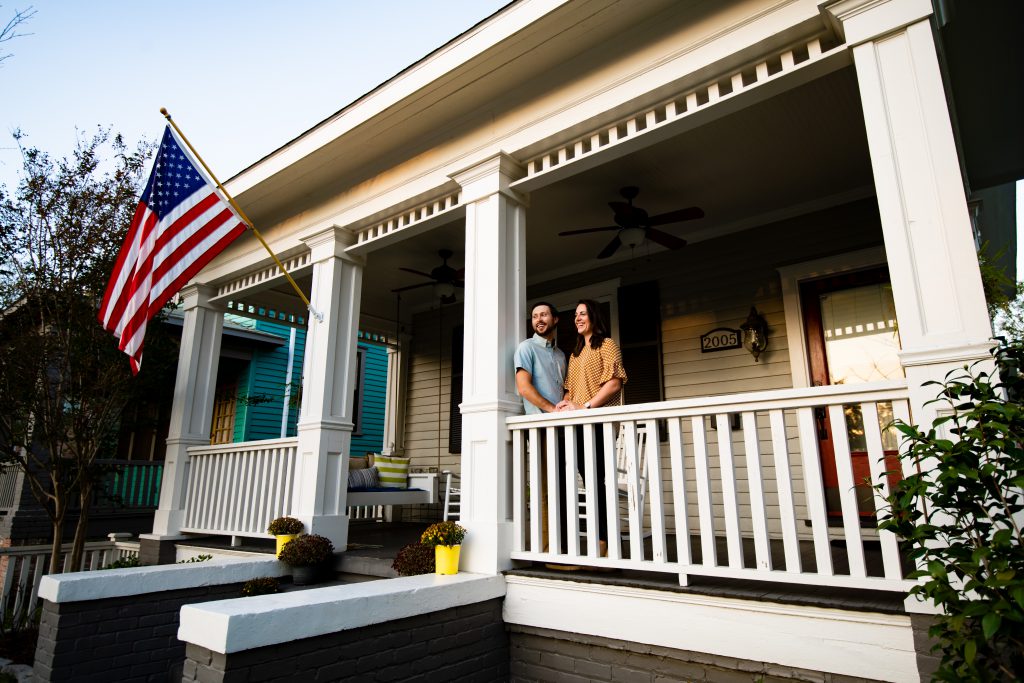 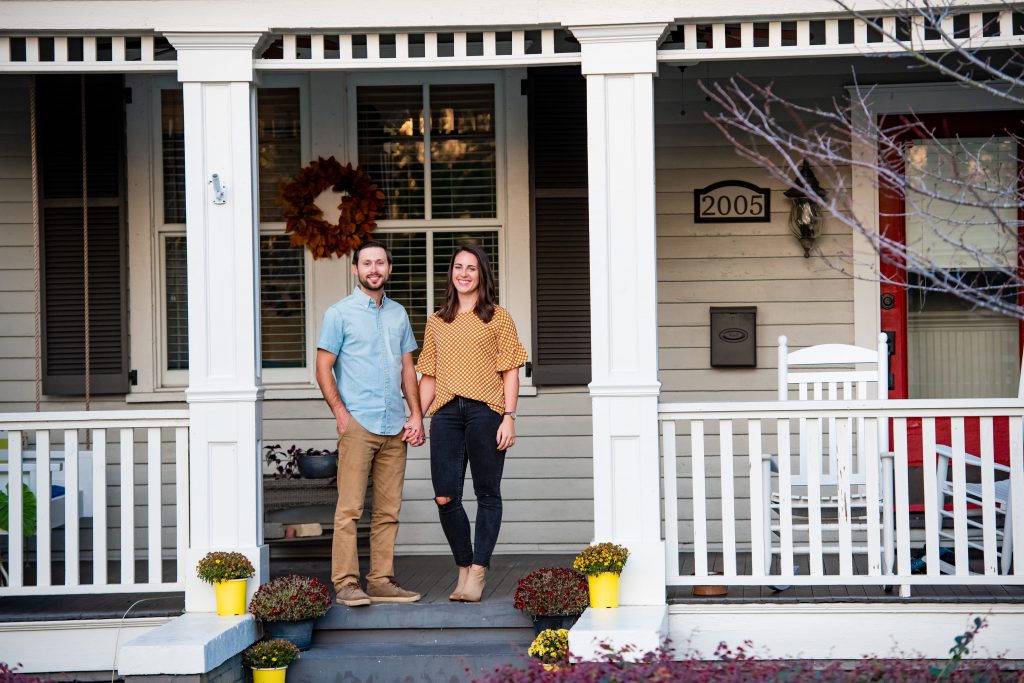 “Wilmington’s history is so complex and so interesting,” says Emily, who interned at the Bellamy Mansion during graduate school. With a deep appreciation for history, it’s no surprise she’s hatching a plan: bridging the past with the present, she’s researching the house’s history. In fact, (spoiler alert!) she hopes to honor the house with a plaque from Historic Wilmington Foundation. Perhaps another memory—a plaque naming—will be made on Emily and Dan’s front porch soon.

What would the Happicks want others to know when they are no longer the stewards of the house?
“It was always open to family and friends,” says Dan. “And a lot of good memories were made here.”

Emily is the Operations Success Specialist at N2 Publishing.
Dan is the Owner-Operator of Labor Panes Window Cleaning and Pressure Washing.

Support your neighborhood’s unique history by becoming a member of Historic Wilmington Foundation.

Are you a steward of an old house?
Adorn your home with a plaque from HWF’s renowned plaque program.