Suzanne Stanley, Tell Us Your Story

“The first time the front door swung open, I knew I was home,” Suzanne says. Years of neglect had taken their toll on the Greek Revival farmhouse, but the house had a tale to tell. And Suzanne had a vision. She also had guts, which she needed to address years of neglect evident in nearly every inch of the structure. 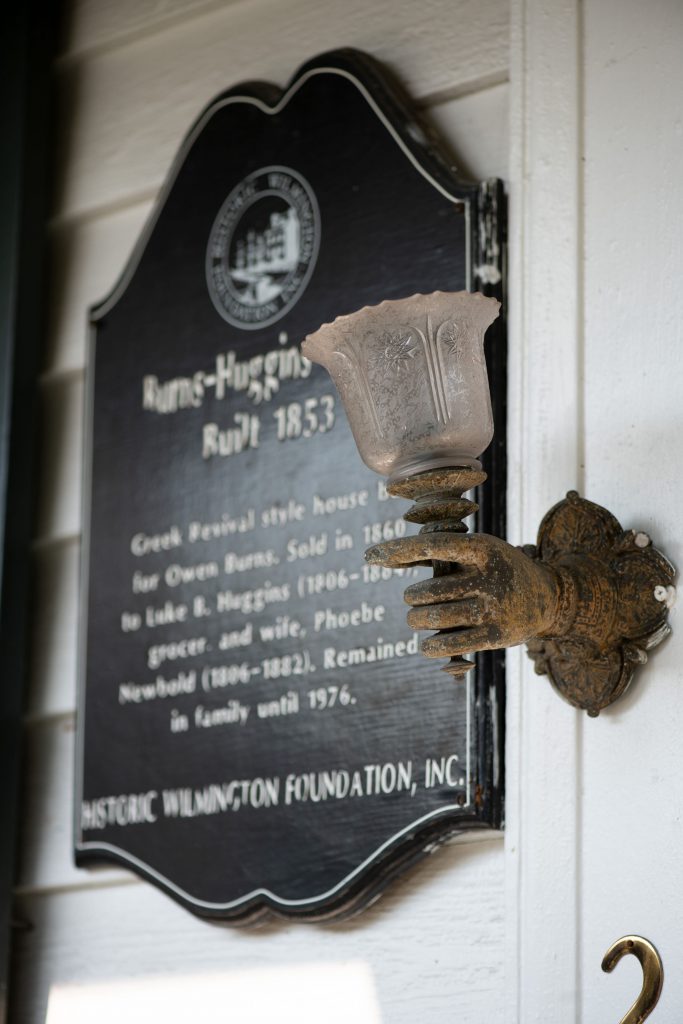 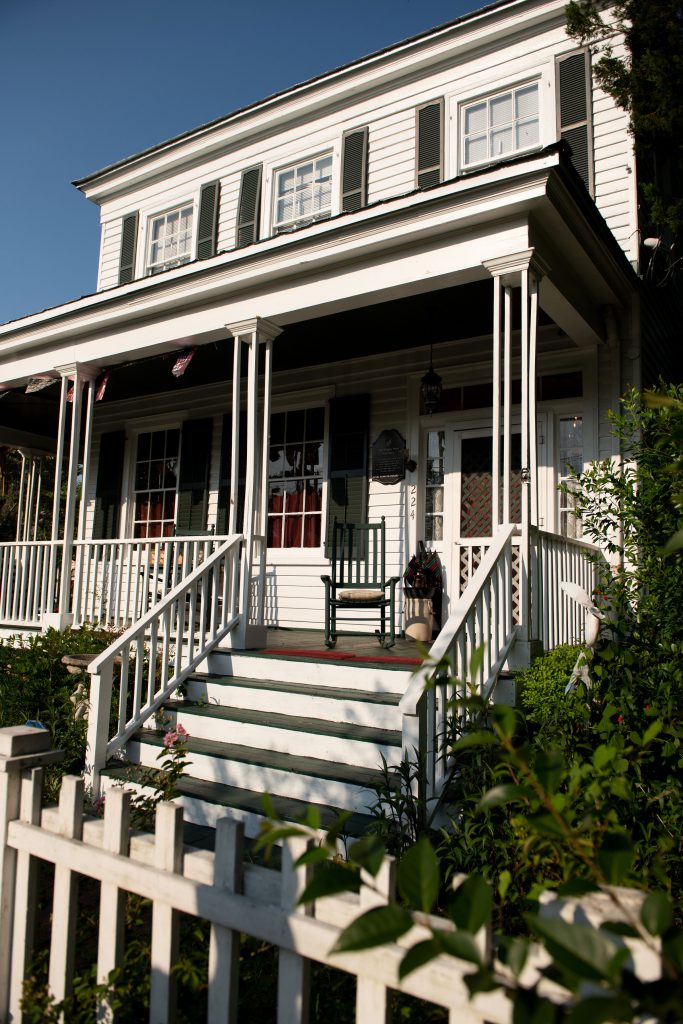 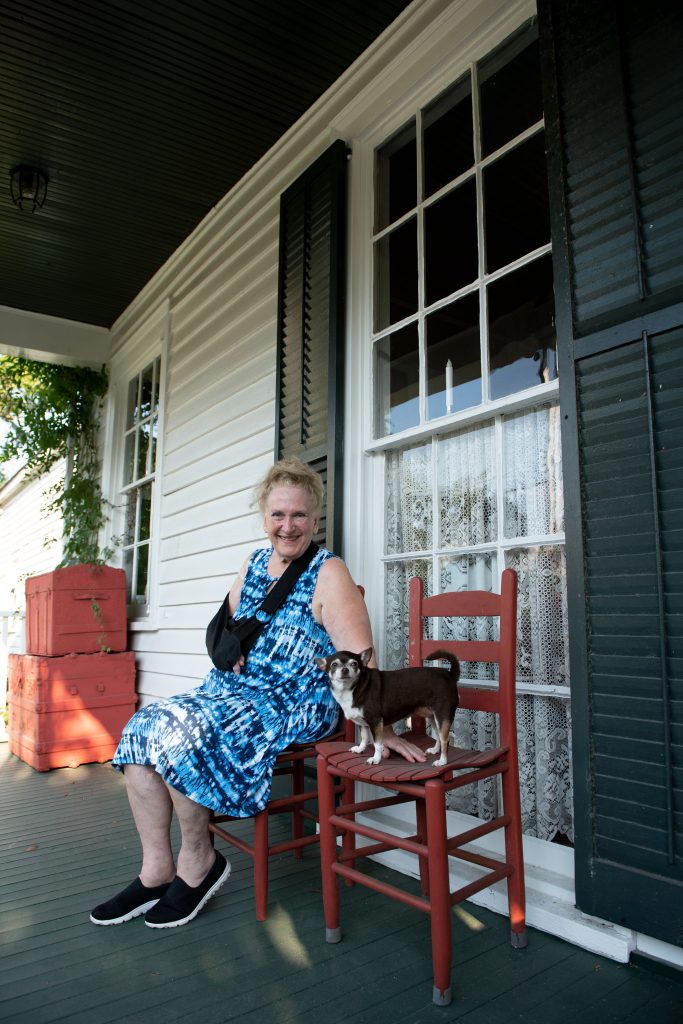 “Light bulbs hung from cords, an upstairs room was covered in soot, and the kitchen was detached from the house—one of only about five detached kitchens remaining in all of Wilmington.”

“Originally, the detached kitchen was part of the quarters [of enslaved people],” explains Suzanne. The place represents a painful time in history “when men enslaved others… And [how] it was so very wrong. But this also tells us how far we’ve progressed from that inhumanity.”

Although the city had condemned the house in the 1980s, it escaped the wrecking ball when the Wright Foundation purchased it to save it. That’s when Suzanne became the next chapter in the house’s story.

She was living in New York then, a widow with teenage children. In need of a new beginning in an affordable city, she thought about Wilmington. “My sister JoAnn, who was a realtor in Wilmington, sent me a newspaper photo of the house. Sight unseen, I bought it.”

Suzanne scraped and polished the original heart-of-pine floors and repaired the plaster walls. She made the sleeping porch into a kitchen and bath, and preserved the original detached kitchen, which is now used for guests. She restored the picture rails and the huge sliding pocket doors that separate the dining room from the parlor. A curtain rod above the doors remains, a reminder of the portiere that once hung there to keep out drafts and offer another layer of privacy.

Like many of Wilmington’s old homes, giant floor-to-ceiling windows in the living room allow access to the porch. In this case, the porch is a wide and welcoming wraparound with deep green floors and ceilings.

“When I sit on my porch in the early morning, I enjoy the nature. Sometimes, I can even feel the breeze off the Cape Fear River. People pass and interact as they walk their dogs. They walk by on their way to the riverfront or to church or to Temple… There is such a sense of loving community here.” 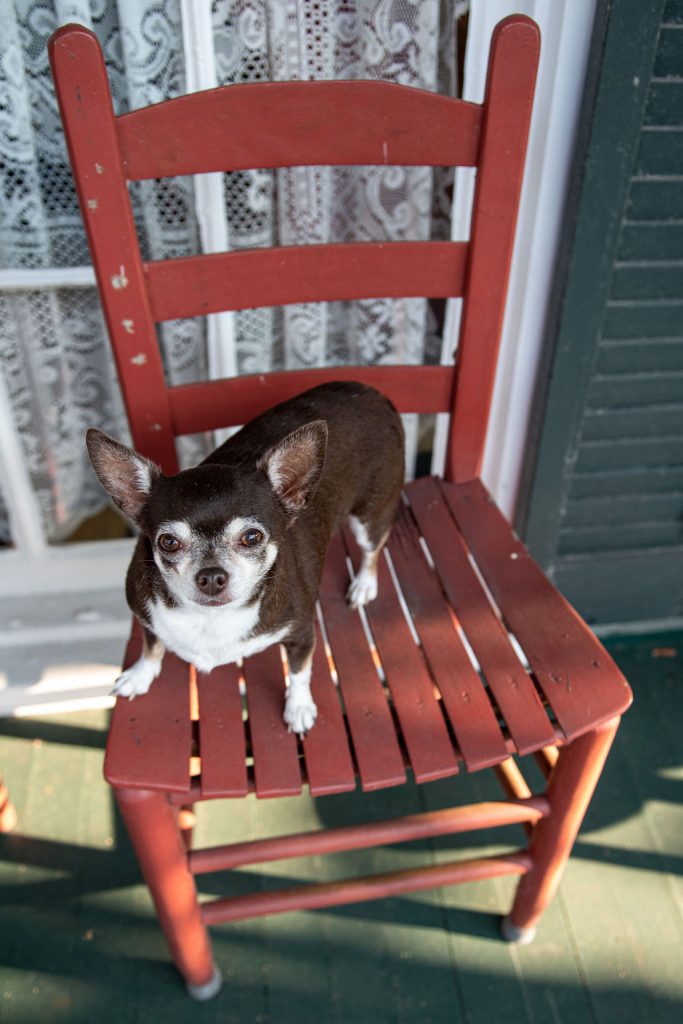 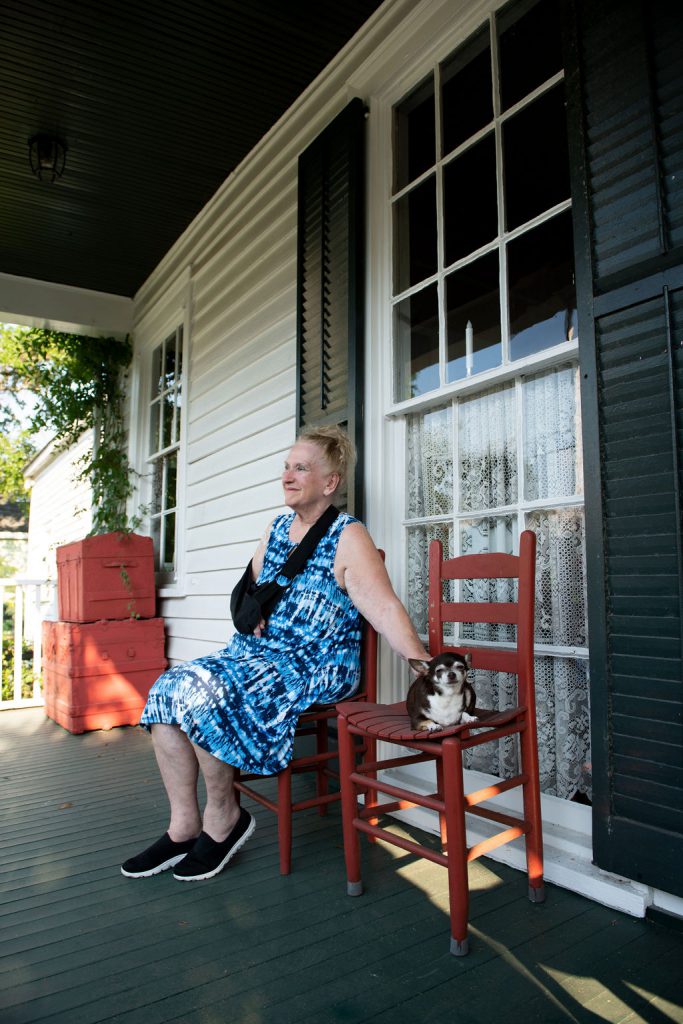 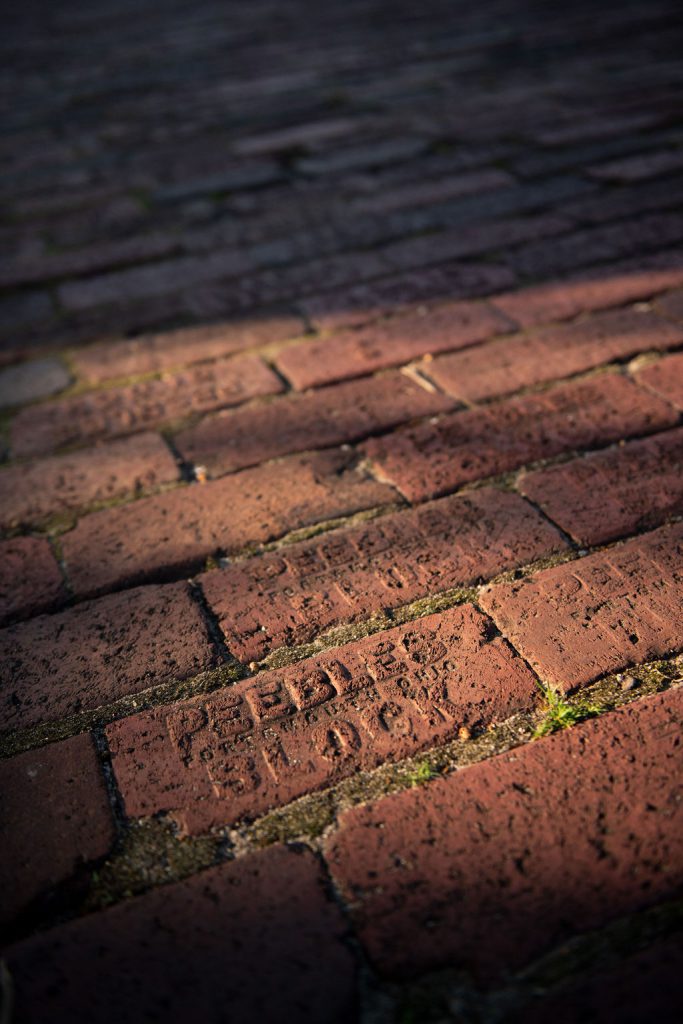 Outsiders feel this, too. Even Hollywood can’t resist Suzanne’s neighborhood, or her house.

“The Member of the Wedding was filmed here, both upstairs and downstairs. My furniture and glassware were used as props. They built a fake Victory Garden outside! And the [exterior of the] house across the street was filmed for The Muppets from Space.”

Inside Suzanne’s home, glass doorknobs, four fireplaces, and bronze hardware with a patina that is art unto itself display the attention to detail that the house’s prior owners enjoyed.

Suzanne gestures to something over there—on the wall by the staircase. It’s a framed document. A deed to the farmhouse, dated 1857, reads:

This, one of the earliest and ugliest chapters of the home’s story, is one Suzanne will ensure is not forgotten.

A different kind of history is now made in this historic district, where every house is unique, and each has a tale to tell.

Suzanne leans on the railing as she looks out at the brick street. “I love this historic neighborhood. It’s diverse in every way. There are older people living here that have lived here their whole lives, and young families who are moving in. Neighbors grow veggie gardens and flowers, and they work in their yards. I live on the best street in Wilmington… We are all friends, and we all look out for each other.”

Suzanne’s home boasts a black plaque: The Burns-Huggins House. Built for Owen Burns and sold in 1860 to Luke Huggins, a grocer, and his wife, Phoebe. Next to the plaque hangs a distinctive hand-and-torch sconce, bronze and very old. “That was one of the things we found buried in the yard,” she said. 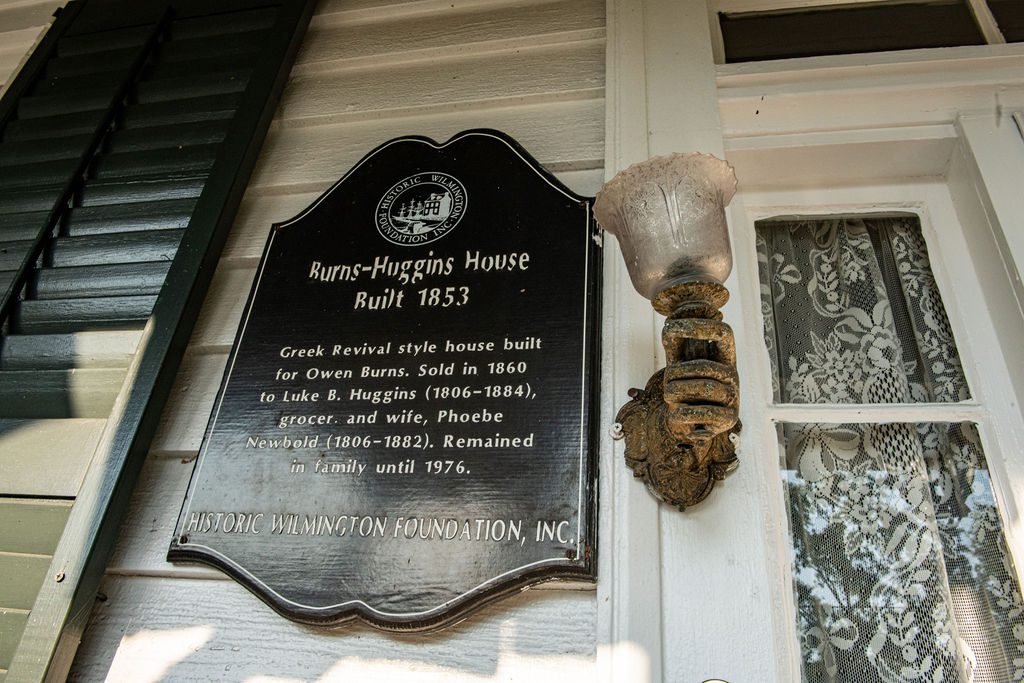 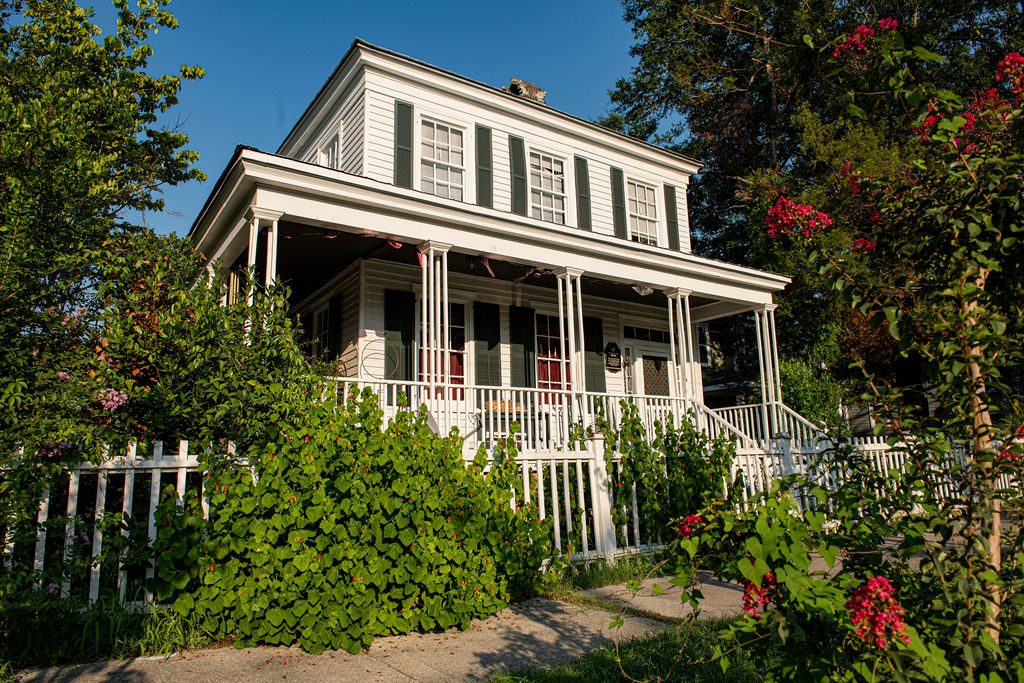 And the room with all the soot? It wasn’t from a fire. “It’s from when W.A. Whitney, the turn-of-the-century watchmaker, lived here.” As he repaired watches late into the night, “The soot was from his kerosene lamp.”

Suzanne is honored to be the steward of this home, and she believes she’s not alone in wanting to watch over the place.

“I met my first ghost in the detached kitchen. She looked as surprised to see me as I was to see her,” said Suzanne. Sometimes, guests will ask her or her daughter about the sweet aroma of pie wafting through the air. “We’ll laugh and say, ‘Our ghost is busy baking again.’ A few family members have met her throughout the years, but if you think she’s the only ghost residing here, think again,” she said, grinning. 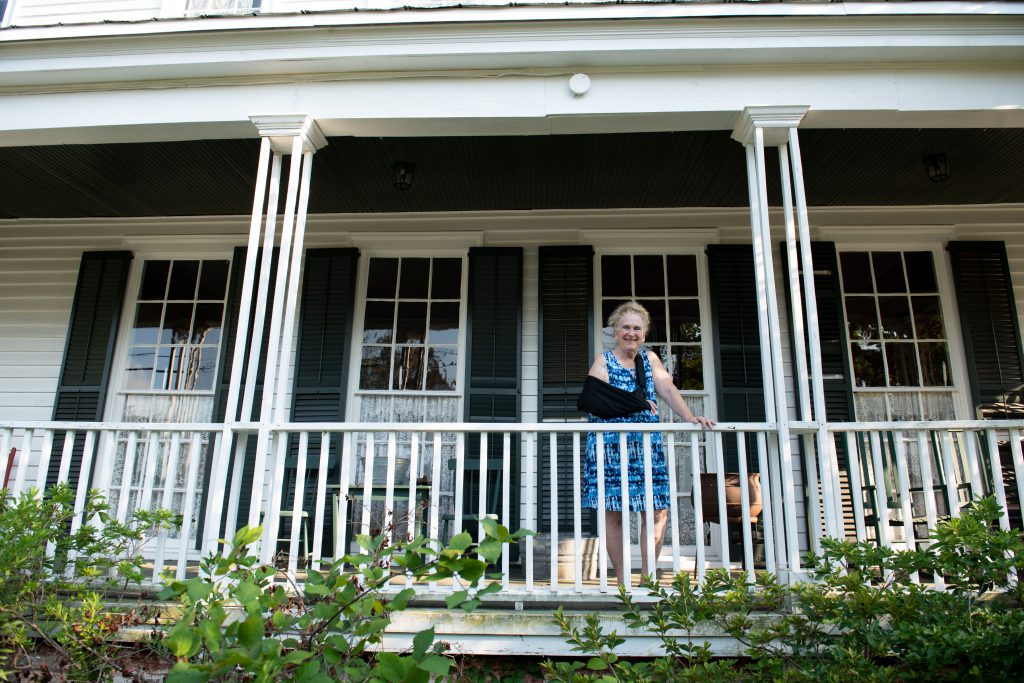 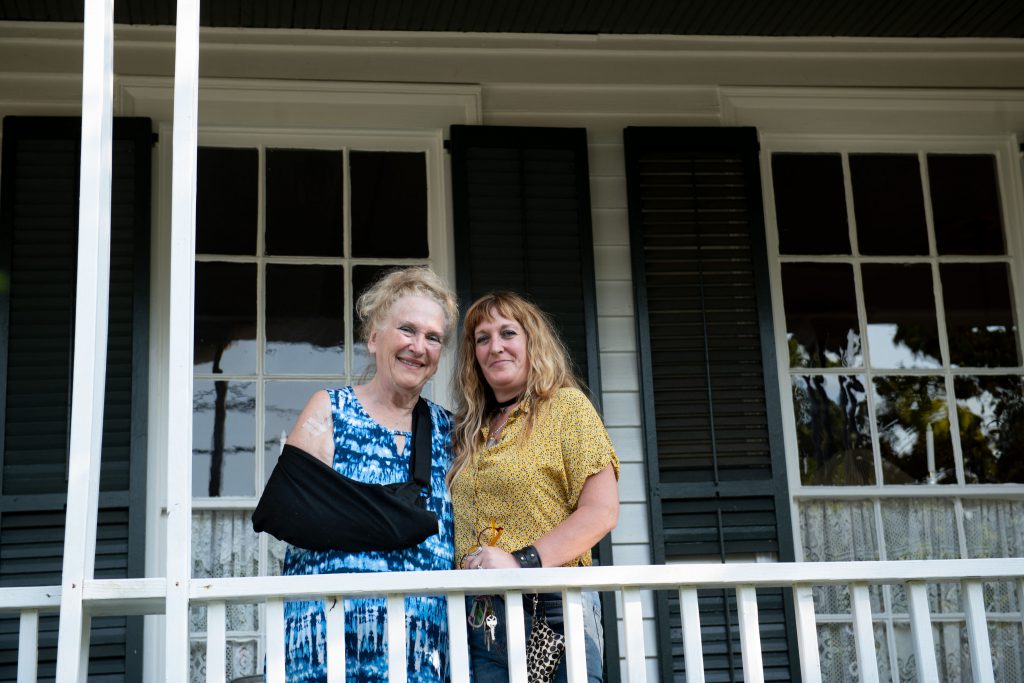 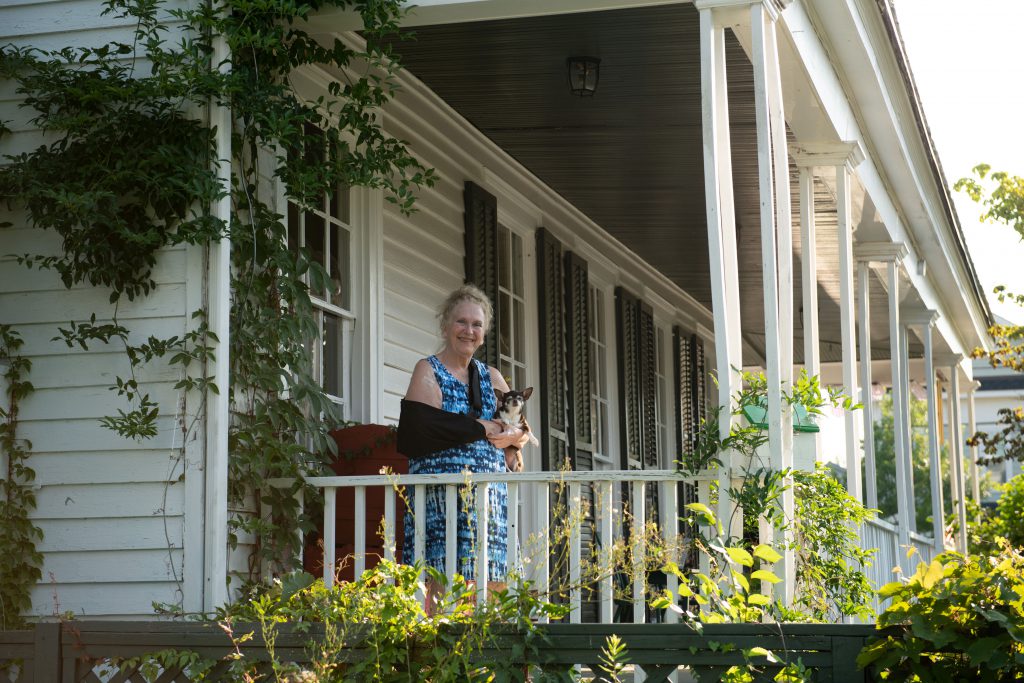 And what other surprises did she find buried in the yard? Well, that’s for another story.

Suzanne is a former Manager of Cape Fear Filmmakers Accord, a nonprofit professional film-makers’ organization.  Currently, she happily works at the Ivy Cottage.

Support your neighborhood’s unique history by joining the Historic Wilmington Foundation or honor your home with a plaque, www.historicwilmington.org.