Interested in attending one of our FREE walking tours? Scroll down to see our upcoming tour schedule and sign up by clicking the “Register Now” button! 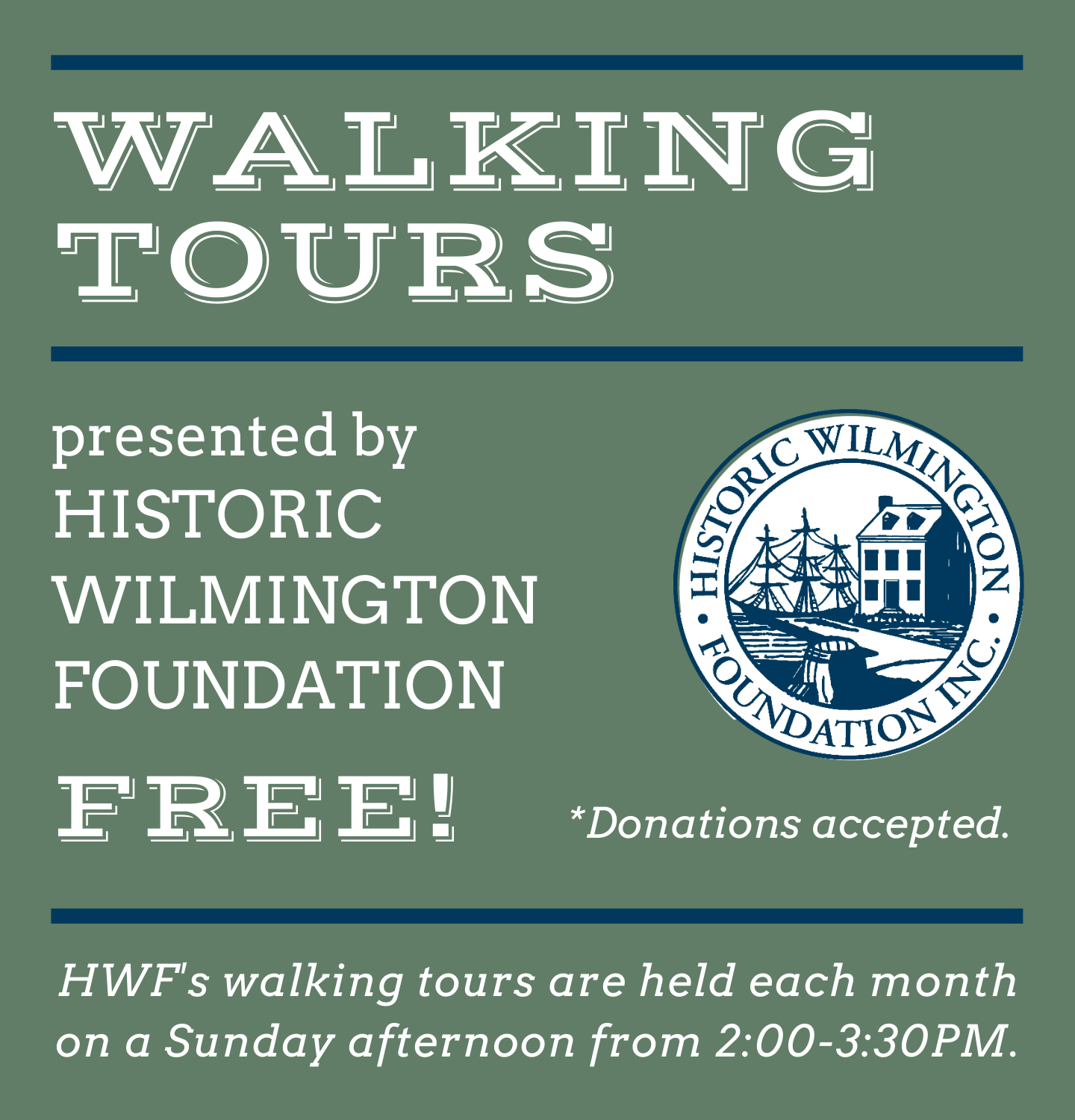 HWF’s Executive Director Travis Gilbert (pictured, left) leads many of our walking tours, though it is our honor and joy to collaborate with other local organizations and historians to frequently bring in guest guides! Through these partnerships, we are able to engage more deeply with our history and paint a complete picture of where we’ve been—and where we’re going. Each (free!) tour is specialized, and so are our guides! No matter who is leading the way, you’ll be entranced by their knowledge and storytelling. Details about individual tours can be found, below.

Celebrate National Preservation Month by exploring the history of Wilmington’s historic preservation movement in downtown Wilmington. Learn about the movement through the built history preserved by organizations such as the Historic Wilmington Foundation, Preservation North Carolina, Lower Cape Fear Historical Society, and Colonial Dames. Your guide will chronicle the creation and expansion of Wilmington’s local historic districts. Special attention will be given to properties with historic preservation easements—or legal agreements protecting the property.

Wilmington’s newest district is thanks to a commitment to adaptive reuse! Explore the Soda Pop District, from its adaptive reuse of the 1945 Oldsmobile Buick Dealership into Hi-Wire Brewing and the current rehabilitation of the Coca-Cola Bottling Works. The walking tour will explore other architectural gems in this neighborhood, including New Hanover High School, Trinity Methodist Church, and Hughes Bros – who recently celebrated their 100th anniversary!

This event has reached maximum capacity.

Join us for a free guided tour through Wilmington’s heritage trees—a vital part of our landscape and history—in celebration of Earth Day and Arbor Day! The City of Wilmington’s Heritage Tree Program is dedicated to the identification and preservation of heritage trees, which are defined as significant trees due to their age, rarity, grouping, overall beauty or historical significance. This walking tour is a partnership with the Alliance for Cape Fear Trees and the Wilmington Tree Commission.

Robert and John Wood constructed many of Wilmington’s 19th-century brick residences, houses of worship, and commercial structures. The Wood brothers’ career, launched by the construction of St. James Episcopal Church in 1839-1840, resulted in the construction of several Wilmington landmarks, including Thalian Hall and the Latimer House. Bricks were manufactured at a kiln along Smith Creek, north of Wilmington, by enslaved persons often hired out by their enslavers to the Wood brothers. This walking tour will use the Wood brother’s career to explore Antebellum building patterns and labor practices in Wilmington. Sites will include preserved structures and lost structures attributed to the Wood brothers, such as the Front Street Methodist Church and 1874 U.S. Post Office.

Wilmington is well known for its front porch culture, which has existed since the town’s founding in 1739/1740! This walking tour will focus on the architecture and use of Wilmington’s outdoor living spaces, from 19th century side piazzas that are trademarks of the Italianate style, to the Neoclassical Revival porticos from the early 20th century. Participants will learn how to identify the orders of columns, especially Wilmington’s distinctive Temple of the Winds columns. Particular attention will be paid to rear porches that were later enclosed and how to identify this trend in Wilmington’s built history.

Andy McGlinn, chair of Cape Fear Sierra Club, will lead a tour focusing on adaptive reuse and exploring the connection between preserving our irreplaceable built history and natural world. Giving new purpose to underutilized or deteriorating buildings, adaptive reuse has numerous benefits for our economy, environment, and culture. Circumventing both demolition and construction, adaptive reuse can reduce urban sprawl by repurposing existing buildings within the city—and it’s often cheaper than making an entirely new building. Perhaps most importantly, adaptive reuse restores a building’s heritage features for future generations.
On this tour, Andy McGlinn will highlight examples of adaptive reuse right here in Wilmington, including St. Thomas Church, Burgwin-Wright House, and Edward Teach! One notable and timely stop is the New Hanover County library, formerly the Belk-Beery department store—currently under threat of demolition as Project Grace plans move forward. To learn more about Historic Wilmington Foundation’s advocacy to preserve and protect the historic built resources on this city block, visit our Current Issues page.

War memorials hold a prominent role in the landscape of downtown Wilmington. In honor of Memorial Day, this walking tour will explore the memorialization of Wilmington’s veterans from the Revolutionary War through the World Wars. The tour will discuss details about the memorial’s creation, a critique of their artwork, and the memorial’s evolving interpretation through time. Particular attention will be placed on the modern relocation of the WWI monument and Confederate monuments.